Yesterday, we saw many faces and forces converging on the streets, whom we missed during many programmes against the operation greenhunt over the past several months. 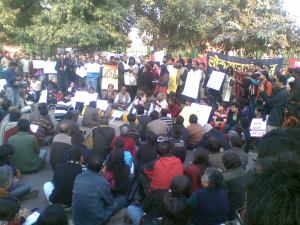 Binayak Sen’s conviction only reaffirms for those who forgot the simple civic science fact that the judiciary is ultimately part of the State, and it has to complement other organs of the State. This complementarity is sometimes contradictory. Such contradictory complementarity has its own functions, which are not simply ideological. Only through such contradictions the state subsumes its own excesses – resolving the problem of coordination between its various organs. One must not confuse these contradictions as some sort of autonomy, as many rights activists do. The overall tenor that the State acquires at a particular phase of societal development is what informs all its organs, one complementing another, even at many times by countering, so that the normality is established.